The case for a 21st Century Society

Is it time for a Millennial Society: a champion to conserve the best of the 21st Century? As our society becomes more disposable and the nature of culture increasingly short-term, do we need a campaigning conscience to help put the brakes on our throw-away approach and inspire a different way of thinking?

The Society of Antiquities was formed in 1717, responding to and prompting interest in ancient heritage. The Society for the Protection of Ancient Buildings (f. 1877) and others followed. The Georgian Group was only established in 1937 and the Victorian Society in 1958, over a century and fifty years respectively after the era of their interest. The narrowing gap between period and foundation of campaigning group was closed and overtaken by the Twentieth Century Society, who were formed towards the end of the last century (1979). What if a new Millennial Society were to get ahead of the game?

Why? What problem would we be seeking to fix? Like any child we kick back against the previous generation. We strive to create our own identity, driving the pendulum of fashion from one extreme to another. The gap defines us. But there is a danger in our desire to be creative, fresh and new in that we delete the work of generations closest to us in the same way that we might tear up a fitted carpet and replace with engineered oak floorboards. The same applies in culture and with architectural heritage. Lancelot ‘Capability’ Brown removed countless earlier gardens in his drive to create his signature pastoral landscapes with lawns that swept up to the windows of the grand mansion. Stuart and Jacobean gardens now make up just over 300 of our Listed Parks & Gardens in England, compared with 900+ Georgian examples. Not all Brown’s fault, but he hasn’t helped.

Or take a more recent example. The raw, stripped-back nature of Brutalism, and its scale, was in part born as a response against the frippery of the 1930s and 1940s. By turn Brutalism quickly fell out of fashion in the early 1980s to be replaced by post-modern styles interested in testing the boundaries of materials and new technology. The reaction against brutalist architecture was severe, with many estates and government buildings demolished in the last decades of the 20th century. Yet, thirty years on, we are growing to appreciate those that are left: when the National Trust opened Balfron Tower in 2014 they sold out. We are not there yet, our Brutalist cygnet is not quite a swan, but with the passage of another decade, more of us will have fallen back in love with the austere, honest nature of the likes of Park Hill in Sheffield or London’s South Bank. More recently still, NASA published guidelines for the protection of lunar heritage – seeking to ensure that Neil Armstrong’s small step will be conserved physically, as well as through his words. 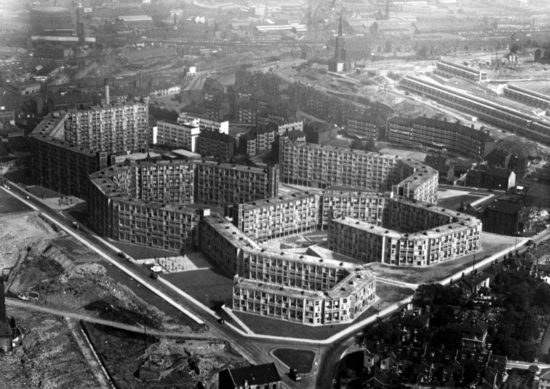 The recent past falls into limbo – too young to be classed as heritage and too dated to be current and cutting edge. Insufficient time has passed to allow a sense of legacy and value to mature. In a world with an already short attention span, and an increasingly disposable society, it is yesterday’s past that is at greatest risk.

How would a Millennial Society help?

How would a Millennial Society help? It might start by asking the question, ‘What would you save from the first decades of the 21st Century?’ I’m not talking of the national set pieces – the Shard or Olympic stadium – they are big enough to stand on their own two feet and will have advocates and detractors arguing for and against the wrecking ball when it comes. I am interested in the layers beneath these, the locally special and the everyday, in effect recent heritage that provides the warp and weft of life.

Could anyone love a Barratt home enough to want to preserve it? I am not sure (unless they became so rare as to become a museum artefact), but what about an early housing estate that adopted sustainable principles, such as Redrow Homes’ Stamford Brook in Cheshire. It looks like a normal estate, but underneath the homes are filled with energy-saving gadgetry? Or, on a similar sustainable theme, The Triangle, forty-two terraced houses made of timber, Hemcrete and lime render, taking their inspiration from Swindon’s tradition of railway architecture.

A role of the Millennial Society would be to punctuate change, to prompt a moment to pause and reflect, thinking about future generations before pressing the ‘demolish’ button. We might hate Amazon’s enormous distribution warehouse in Peterborough (a 21st century response to our changing shopping patterns, mirrored by changes to the High Street), but others before us intensely disliked The Barbican, or Victorian mills, or squalid timber-framed Tudor buildings, with their ‘nasty’ interiors (Erasmus in 1530).

The past is not dead. It’s not even past

It’s not easy trying to predict our future listed buildings and conservation areas, and this may be to do with being too close – living in the period rather than beyond it – but it is also about the impact of globalisation. Trade, transport and the digital revolution have made global the new local. And the result is that places look increasingly familiar. Same brands, same materials, same architecture. Southampton looks like Southport, looks like Southend. If there is one thing to mark the 21st Century it is the continuing loss of communal, distinctive styles.

So, perhaps the Millennial Society would be a historical organisation that is about the future more than the past. It would encourage a conservation-led approach to new development – to think about legacy before construction, rather than focus on the ribbon-cutting, award-winning, blaze-of-glory moment of opening. Its ambition would be to encourage new listed buildings of the future, ones that are confident in the period of their time and locally distinct.

It would be an antidote to the disposable society, a champion of slow architecture and places that look different because they are different. To do this you need to understand and appreciate the past. Fittingly, a Millennial Society would perform a neat post-Modern trick of being about the future, but a future rooted in the richness and character of the past.

A shortened version of this article was published in The Art Newspaper on 15th April 2016 http://theartnewspaper.com/comment/we-should-consider-a-millennial-society-to-protect-the-past/