World Monuments Fund Britain and the Fondation du patrimoine share a common purpose to promote, safeguard and conserve exceptional cultural heritage within France, the UK and beyond. In response to these shared objectives, the two organisations have formed a partnership that seeks to strengthen ties and create a network of advocates for UK and French cultural heritage. The focus for this agreement is to facilitate the funding of conservation projects, particularly in the UK for French heritage, and to share best practice in the field of conservation. The first project is the conservation and relocation of Queen Bérengère’s Tomb. 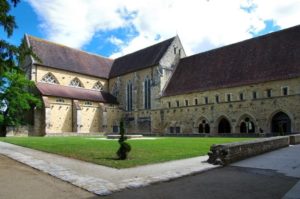 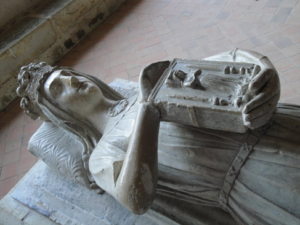 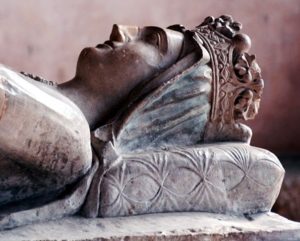 Often overshadowed in the history books by her husband Richard the Lionhart, Bérengère de Navarre is an interesting historical figure in her own right. Through ancestry and marriage, she became Queen of England, Queen of Cyprus, Duchess of Normandy and Countess of Anjou and Maine.

Although Richard rescued his future Queen from being taken hostage by the King of Cyprus and she accompanied him on the Third Crusade in Syria after their union, their marriage was largely political, and they spent little time together in subsequent years. After his death from an arrow to the eye in 1199, the widowed Queen received the land of Espal. A generous benefactor to the church, Bérengère founded the Cistercian Royal Abbey of Epau in 1229, outside the city of Les Mans in the Pays de la Loire region, which would become her burial place a year later.

As was the tradition of the time, Bérengère’s tomb was decorated with an effigy of the Queen in a recumbent or lying position. Dressed in a belted cape, her crown denotes her status as ruler and the book held in her hands reflects her devotion to prayer. The effigy was originally painted in bright colours and the tomb was located inside the Abbey. However, since the French Revolution, it has not been her only resting place.

The effigy has been moved several times throughout the centuries, and at one stage it was lost before being found in barn covered in hay. When returned to the Abbey, it was located inside the Chapter House which is open to the elements. The statue suffered considerable damage over the centuries and the unstable environmental conditions of this location served only to add further conservation challenges.

The project relocated Queen Bérengère’s statue inside the Choir of the Abbey, a place where abbey founders are historically buried. Various conservation studies, including polychrome analysis which revealed the effigy was originally painted, were carried out in 2018 and confirmed the viability of a relocation. When considering the move, the issue of historical authenticity and the conservation challenges were considered. It is likely to tomb originally occupied a space within the centre of the sanctuary, a place and statement of considerable political and liturgical significance. Therefore, the new location inside the choir, speaks to both project priorities – a place that is both authentic and protective. In addition, the reassembly of the tomb included the reinstatement of three recently discovered stone carved panels of the chest forming the base of the effigy. The project required specialist conservation techniques, such as laser cleaning of the tomb and the base, alongside carbon dating. Now completed, the public are able to view the medieval tomb as it was discovered in 1817.

Donate to the Project 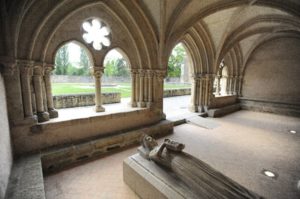